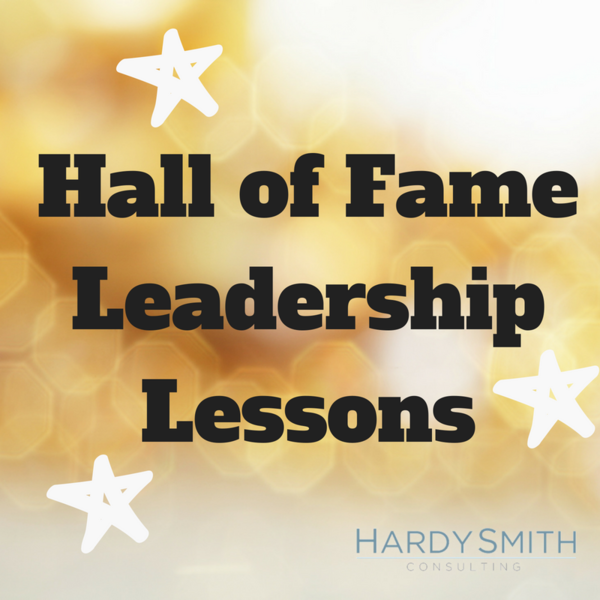 Would you like to reach Hall of Fame level of success? Then you will want to follow the right path.

In my life, I have been lucky enough to receive invaluable leadership lessons from personal and professional relationships with five individuals who have achieved hall of fame level recognition in their professions. Their guidance and personal example, which have tremendously benefited me, would benefit anyone in a leadership role.

The passing of each of the first four men has left a tremendous void among their families, friends, and colleagues.

Although these hall-of-famers were standouts in the sports industry, they share a number of personal performance characteristics. Fortunately, these qualities have application in other professional fields as well as in life:

Bill France, Sr. was a big dreamer who believed in taking action. While there are a number of versions, and with original attribution uncertain, Bill, Sr., often quoted, "On the plains of hesitation lie the bleached bones of those who, when close to grasping victory, sat and waited—and while waiting, died."

He was relentless in developing relationships. His vast network was literally worldwide and he worked it to turn ideas into reality.

Bill France, Jr. sought the opinions of others when in decision-making mode. His “Is the trouble worth the trouble?” question was a qualifying standard for new ideas. He was a voracious reader with practically no limit on subject matter. He was constantly on the lookout for issues with a potential nexus for either helping or harming his business.

The most valuable advice I ever received from Bill was, “Anticipate. Solve your problems in advance.”

Les Richter was not only a gifted athlete, he was class valedictorian at the University of California. His focused commitment to excel carried over from the football field to the business world. When facing any challenge, this results-driven super achiever always took time to first map out a strategy.

Les spent time to research the issue at hand to ensure he had command of any necessary background. He identified priority relationships for a support network critical to success. His willingness to compromise helped convert potential opponents to supporters.

Les was a consummate team player always deflecting the spotlight onto others.

He was resolved to be positive. I never heard him complain about a difficult task or offer excuses for why a job couldn’t be done.

Jim Hunter was an absolute public relations wizard whose wise counsel and mentorship shaped an entire industry. He was a communicator who invested in people. Jim guided countless individuals, and the range of those benefiting from his direction had no boundaries. He gave encouragement and helped create opportunities when he saw potential and willingness to work.

Jim believed in extra effort. A classic example is from a time when NASCAR garage safety regulations required legs to be covered. A female reporter showed up, not knowing the rules and wearing a skirt. After being denied entrance into the garage she came storming into Hunter’s office to complain. Calmly, Jim stayed seated behind his desk, took off his pants, and told the reporter to put them on and give him her skirt, which he wore the rest of the day.

The hall of fame career of Steve Ridder, one of college basketball’s winningest coaches, is epitomized by actions that back up his words. As a basketball coach and athletic director he has led the building of an athletic powerhouse at Embry-Riddle Aeronautical University. ERAU is one of the nation’s top engineering schools and known worldwide for the education and training of pilots.

Steve established recruiting standards based on a prospect’s being “the total package”: student-person-player. His expectations for excellence far exceed any minimal eligibility requirements. He demonstrates an unwavering commitment to these principles. He takes tough disciplinary action when necessary, even when a key player is involved.

Steve’s best coaching advice to me: “Get the right people, in the right positions.”

Would you like to find the path to Hall of Fame level success? Follow the direction of these five extraordinary individuals.

Please share with our community your own Hall of Fame Leadership Lessons and how you have benefited from them.